Well we have had one of the warmest and wettest Decembers on record and January has only just about conformed to the norm of winter. In Teignmouth (Devon) a maximum temperature of 17.2 °C was recorded in December and generally temperatures around the UK were 4oC above the normal UK mean for the time of year. In fact, temperatures have reached levels that we would expect to see in October or April. Not only has it been mild, it’s also been one of the wettest winters, with 191% of average rainfall, with certain places receiving between 2 and 4 times their monthly average.

With the snow drops and daffodils all too keen to appear, we could all be tricked into thinking we will miss winter this year, and from looking at the long range weather forecast, we may have a couple of weeks of normal January temperatures but with a milder end to the month.

Whilst climate science is telling us to expect warmer conditions, the weather is unlikely to oblige in a consistent fashion, after all it was only three years ago that we had an exceptionally long and cold winter. I suspect that by injecting billions of tonnes of greenhouse gases into the atmosphere, we’re actually creating instability rather than just warmer weather; more chaotic weather patterns are becoming the norm.  So be prepared!

What does all this mean for those of you with wood pellet boilers? The positives are that most of you will have noticed that your store of wood pellets is lasting longer than you would normally expect at this time of year.  The mild weather has also been prevalent across much of Europe too, causing something approaching a wood pellet glut, so prices have been falling mid-winter, hitherto unheard of.  Enjoy it while it lasts! 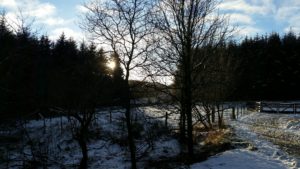